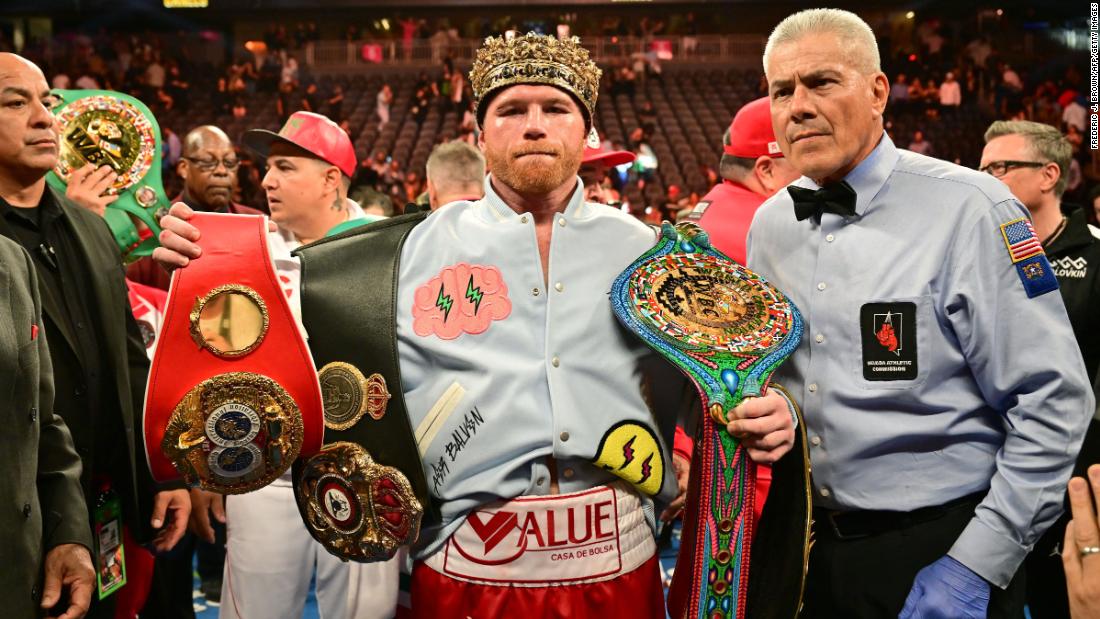 Following two bruising fights, both with disputed results, the pair met for the third and final time at T-Mobile Arena in Las Vegas.

And in front of a partisan crowd in favor of Álvarez — this fight came on Mexican Independence Day Weekend — the fan favorite was able to claim a unanimous victory.

Despite dominating the early round, he had to face a late comeback from Golovkin, but eventually won via the judges’ scoring, with two scoring the fight 115-113 and the other scoring it 116-112 — in Álvarez’s favor.

The victory cements Álvarez’s position as one of boxing’s best pound-for-pound fighters as he retained his IBF, WBA (Super), WBO and WBC titles and his undisputed super-middleweight crown.

Although the pair have previously exchanged barbs and expressed a disliking for each other, they embraced in the ring after Saturday’s fight, both expressing their admiration for each other.

“He’s strong, he’s a great fighter,” Álvarez said. “For me, I’m just glad to share the ring with him. We give the fans three really good fights. I’m glad to be involved in that kind of fight.”

What does the future hold for these two legendary fighters?

For Álvarez, his victory over Golovkin was a return to winning ways, having been beaten in his previous fight, only the second defeat in his career.

The Mexican fighter was stunned by undefeated Russian fighter Dmitry Bivol in their light heavyweight title clash, as he attempted to make a step up in weight.

And although the 32-year-old confirmed that avenging that loss against Bivol is his next target, he revealed the fight will have to wait as he recovers from a hand injury he suffered before the fight against Golovkin.

According to ESPN, a team physician said that Álvarez has a tear in the cartilage in the wrist which could require surgery and six to 12 weeks of rehabilitation afterward.

Álvarez added: “I left everything in there. I need surgery on my hand, I’m not good in my left hand. Everybody knows [Bivol is the fight I want]. We’ll see what happens in that fight. But I need rest.”

For Golovkin, at 40 years old, many thought this would be the final act of his storied career.

However, the Kazakh fighter said he plans to keep on fighting. “Absolutely,” Golovkin said when asked he would continue fighting.

“I still have this fire burning within me. I have the passion for boxing. Don’t forget I have three belts at 160lbs. I feel great.

“I did not allow any serious shots. I’m tired, I’m fresh. I feel the strength and power within me. Of course, if opportunity presents I will be looking to return in the ring.”