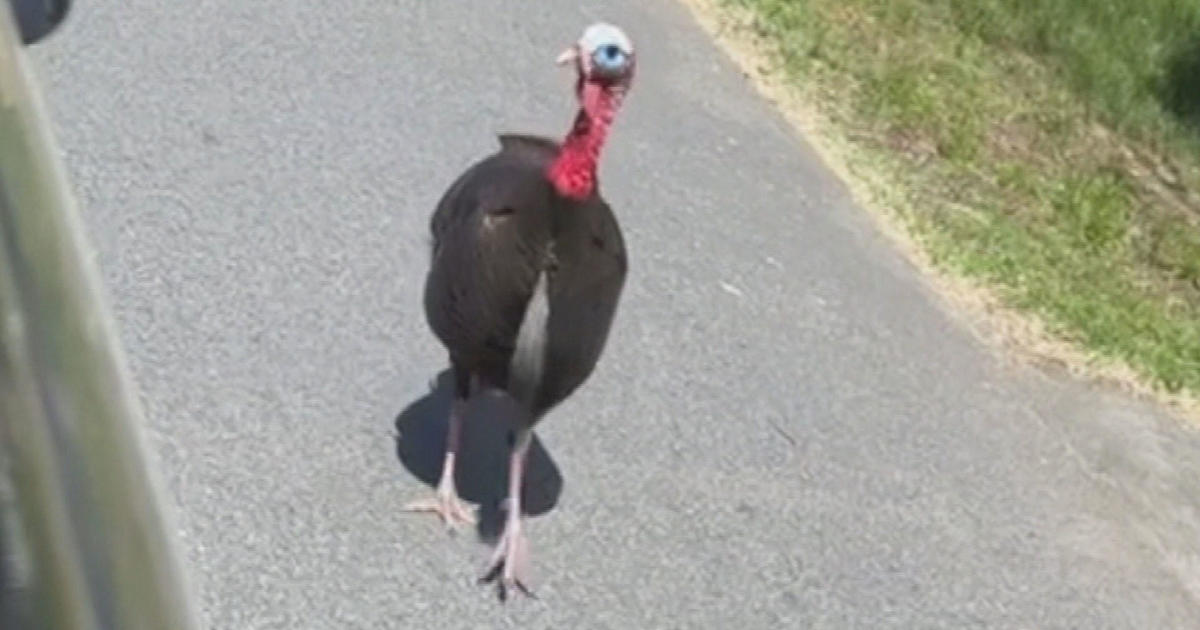 WOBURN – It’s a turkey takeover for one Woburn neighborhood. The pesky birds are pecking at cars, tires, and children.

“The most aggressive one is Kevin,” says Meaghan Tolson, a neighbor who has named the aggressive birds. “Then there are three ladies because their coloring isn’t so distinct. It’s Esther, Gladys and Patricia. Even if you are parked, Kevin will try to get in your car.”

The attacks are happening near Nashua and Tremont streets. Every neighbor has a story, and most have hilarious, yet terrifying, videos of the incidents. Tolson has almost a dozen videos.

“You have to open your passenger side door and lure them over there, then make a clean break to the house,” laughs Tolson.

The turkeys hold people hostage by stalking them in their homes or cars. Each resident has a different way of escaping.

“They always go toward [my neighbor’s] car, so she will refuse to leave her house if they are going toward her car,” tells April Drolette, another neighbor. “There have been times I’m trapped in my car, can’t get out, and have to call family members. They usually bring an umbrella. It takes a team.”

Mass Wildlife says this type of aggression takes time and comes when people feed the animals or have bird feeders. The longer the birds get accustomed to humans, the more they see people as part of their flock or rafter. The pecking and chasing are them asserting dominance over people, or from seeing their own reflection in a car door.

“Turkey behavior starts to kick in where they become so habituated with people that they are not really seeing that distinction,” details David Scarpitti with Mass Wildlife. “It’s all about how they respond to the turkeys. If you turn and run away, now you are subdominant. He just won that battle.”

Mass Wildlife urges people not to feed wild animals. If you do encounter one of these aggressive turkeys, Scarpitti suggests you keep them in front of you, and open an umbrella in their direction. It will scare them off and protect you.