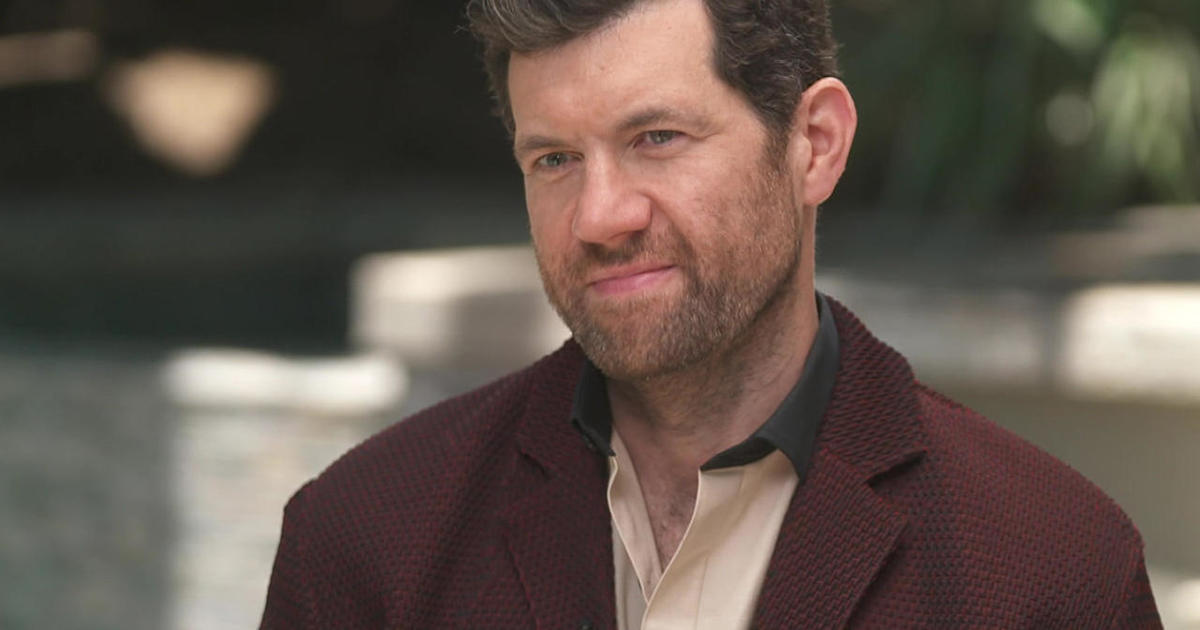 We love romantic comedies – the chance meetings, and of course the against-all-odds happy endings.

Comedian and actor Billy Eichner loves rom-coms, but he has one complaint: “They never made one about a gay couple. We weren’t in those movies at all. We weren’t even the best friend at that point. We just were nowhere to be found.”

Eichner thinks it’s time for a change. With director and co-writer Nicholas Stoller and producer Judd Apatow (no strangers to rom-coms themselves), Eichner has co-written and stars in what’s being billed as the first gay romantic comedy ever released by a major film studio, and also the first to feature an all-LGBTQ principal cast. It’s called “Bros.”

To watch a trailer for “Bros” click on the video player below:

Correspondent Jonathan Vigliotti said, “I went to the screening with my husband and halfway through, we had this moment where we looked at each other, recognizing that this was the first time we had seen ourselves represented: two gay men fronting a romantic comedy on the big screen.”

“Yeah, and what’s amazing is that our priority when we wrote the movie was to make a hilarious movie,” said Eichner.

The movie follows Eichner’s character, Bobby, as he stumbles towards a relationship with love interest Aaron, played by Luke Macfarlane (whom you may recognize from having played the leading straight man on a bunch of Hallmark movies).

Vigliotti asked, “Why do you think it’s taken this long for a movie like this – two gay men in a romantic comedy – finally being on the big screen?”

“Well, the real answer to that is that the world, including Hollywood, has been very homophobic,” Eichner replied. “And it’s a complicated topic, because in some ways Hollywood has often led the charge when it came to LGBTQ issues and representation. And yet, underneath it all, I think there was always a fear that the quote-unquote mainstream audience wasn’t necessarily ready for this type of movie. And I think, because of that, a lot of our stories weren’t told.”

While much of the film is fictional, “Bros” allowed Eichner to get personal. “For me to be an effective writer, a good artist, I needed to be able to be honest,” said Eichner. “It’s all about honesty.”

Bobby: “I was always too gay or I was too niche or, you know, I made people uncomfortable. And I’m telling you: enough people tell you things like that, no matter how confident you are, when you’re alone at night, you start to think that maybe they’re right.”

“I love that monologue, ’cause I feel like it summed up the message,” said Vigliotti, “and maybe your goal with the movie – you presented this relationship in all of its grittiness, not hiding behind anything.”

“That monologue on the beach was inspired by real experiences,” said Eichner.

For example, in 2006 (five years before his breakthrough comedy game show “Billy on the Street”) Eichner said his manager brought talent agents to see one of his live comedy shows: “And asked me if I could make the show ‘less gay’ that month. There were all kinds of overt and less overt ways that people were telling me: ‘You’re really talented, but we’re not sure what to do with you.’ You know, it was all this kind of, like, coded language. Like: ‘You’re too smart,’ someone once said. I was like: You can be too smart? I didn’t know that was a thing.“

Vigliotti asked, ” What’s it like to work on a production where everybody is free to be themselves? Not just free, but celebrated for that?”

“It’s very rewarding. It’s exciting. This is probably the first time we have ever seen that, where you have people in front and behind the lens representing every letter of the LGBTQ community.”

Eichner underscored that when Vigliotti visited the set last November.

“Of the people here, how many are part of the LGBTQ community?” Vigliotti asked.

“I think there might be a few people that have one or two lines that aren’t,” Eichner replied. “But you know, I didn’t wanna completely erase straight people from the narrative the way they’ve erased me for thousands of years, ’cause I’m trying to be bigger than that!”

And Billy Eichner points out that “Bros,” while a comedy, does parody political issues.

Vigliotti said, “Here we are now, too, with the Supreme Court. There is concern that gay marriage could be reversed. What do you say to those that want to take that right away?”

“What do I say to people who wanna take the right to get married away?”

“Right. I would say that they are completely backwards,” said Eichner. “And ‘Bros’ is one example of this culturally, but we are never, ever going backwards. We will be living our lives the way we wanna live them. We’re going to have equal protection under the law and keep fighting for it. We’re going to do with our bodies whatever the hell we want to do with our bodies. And that we’ve existed since the beginning of time. As long as there has been human civilization, there has been LGBTQ people. And that’s going to continue.”

And the latest chapter is now unfolding on the silver screen.

Reflections on the “Heartbreaking” Decision to Give Up Daughter’s Custody by Hayden Panettiere
In a sneak preview, Hayden said that she has experienced cruel lies being disseminated about her as a mother over the years to hosts Jada Pinkett Smith, Adrienne Banfield Norris, and Kelly Osbourne.
On Sep 28, 2022

Halsey and Kelsea Ballerini have stopped speaking, the singer says.
Kelsea Ballerini Reveals She No Longer Talks To Halsey On her new album, Subject To Change, Kelsea Ballerini discusses a variety of topics, not simply her breakup with Morgan Evans. A reference to Kel
On Sep 28, 2022
View all stories