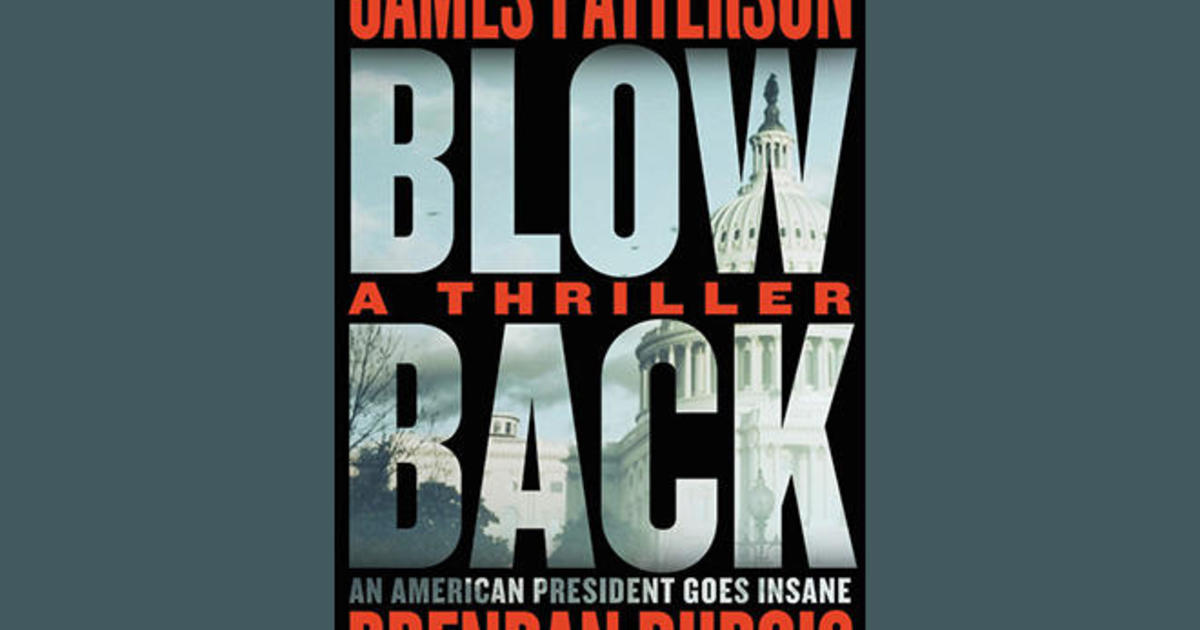 There’s a narcissistic psychopath in the White House, and a pair of secret agents realizes he’s about to destroy the country. That’s the premise of the latest thriller by James Patterson and Brendan DuBois, “Blowback” (Little, Brown and Company).

Like some other presidents before him — Nixon and Trump, for example — President Barrett doesn’t like to work from the downstairs Oval Office. The day after his inauguration last year, in a sit-down with editors and reporters from the Washington bureau of the New York Times, he had said, “Too much history in that place. It feels like you’re in the middle of a museum exhibit. I want to be able to kick back, put my feet on the furniture, and get work done without being interrupted all the goddamn time.”

President Barrett is sitting behind an old wooden desk that was supposedly used by President Harding. He gets up from the neatly piled folders and telephone bank and briskly walks over to Liam.

That’s when the CIA officer notes he and the president aren’t alone in the small, wood-paneled room.

On one of two small blue couches arranged around a wooden coffee table is a woman about Liam’s age, sitting still and looking smart. She’s wearing a two-piece black suit — slacks and jacket — with an ivory blouse. Her light-olive complexion is framed by black hair that is cut and styled close.

She stares at him with dark-brown eyes, and President Barrett says, “I believe you know each other.”

Liam nods, smiles. “Noa Himel. We were in the same training class.”

She gets up, offers a hand, and says, “Glad you remembered me. My hair was longer back then.”

He takes her grip, firm and warm, and says, “I remembered you outrunning my ass on the obstacle course.”

She smiles, sits down. “It’s not called that anymore. It’s the confidence enhancement course.”

With his trademark perfect smile, President Barrett says, “I hate to interrupt this company reunion, but we’ve got work to do. Liam, take a seat next to Noa.”

Liam goes over and does so, catching a slight whiff of her perfume. It’s nice. The office is small, with bookcases, a couple of framed Frederic Remington western prints, and not much else. The PDB feels heavy in his lap, and the president says, “Liam, you can put that aside for now. We’ve got more important things to discuss.”

“Yes, sir,” he says, now confused, as he puts the leather-bound volume down on the coffee table. The PDB has been nearly sacred since the era of President John F. Kennedy, when it was known as the President’s Intelligence Checklist. Since then it has expanded and grown in importance, and it’s now considered the most highly classified and important piece of intelligence the president receives on a regular basis. Some presidents wanted the briefings daily, others weekly, and during the last several administrations, it was prepared on a secure computer tablet, but this president — sitting across from him and Noa, wearing dark-gray slacks and a blue Oxford shirt with the collar undone and sleeves rolled up, his skin tanned and thick brown hair carefully trimmed — demanded it go back to paper.

And now he’s ignoring it.

Liam thinks maybe he should say something, but …

Liam is CIA but also former Army, and he’s in the presence of the commander in chief, so he keeps his mouth shut.

The president says, “Quick question for you both, and one answer apiece. Who are the most dangerous non-state actors we face as a nation? Noa, you’re up.”

She says, “We’ve gone beyond the point where hackers and bots can go out and influence an election or steal bank accounts or hold a city’s software ransom. They can turn off the power, switch off the internet, and incite people in a country to rise up against a supposed enemy. You can be a First World nation in the morning, but after the cyberattack you can be a Third World nation come sundown.”

With Noa going before him, he has a few seconds to think it through and says, “Freelance terrorist cells and organizations. They’ll preach their ideology or twisted view of their religion while they’re killing people and blowing up things, but secretly they’re for sale to the highest bidder. They preach a good sermon, but in reality they’re nihilists. They’ll strike anywhere and anybody for the right price.”

“Good answers,” the president says. “Which is why I’ve called you both in here today.”

“Sir?” Liam asks. He’s not sure where the hell this is going, but his initial impression of his good-looking couch mate, Noa, is positive. She gave a neat, thorough answer to the president’s threat question. He has the odd hope that Noa has a similar feeling about his own reply.

The president clasps his hands together and leans over the coffee table.

“After decades of our being the world’s punching bag, I’ve decided this administration isn’t going to be reactive anymore,” he says. “We’re going to be proactive, go after our enemies before they strike. We’re no longer going to be the victim. I’m going to set up two CIA teams, one domestic, the other foreign, and you two are going to run them. I’m going to give you the authorization to break things, kill bad guys, and bring back our enemies’ heads in a cooler.”