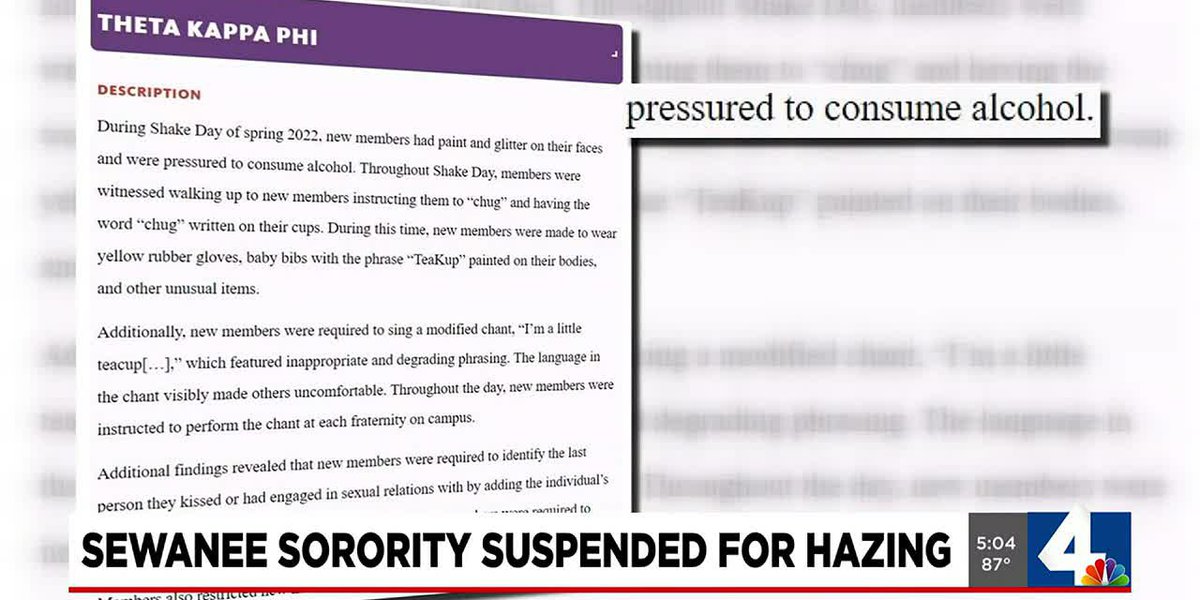 SEWANEE, Tenn. (WSMV) – A sorority at The University of the South has been suspended over accusations of hazing and “humiliating treatment” of new members.

Local News 3 reported that Theta Kappa Phi, or TKP, was suspended “for at least one year” over an incident that happened on the university’s Shake Day earlier this year, according to the university’s Greek life website.

According to the university website, new sorority members were required to put paint and glitter on their faces and were then pressured into drinking alcohol on the university’s Shake Day, the day new members find out what sorority or fraternity they have accepted to.

“Throughout Shake Day, members were witnessed walking up to new members instructing them to “chug” and having the word “chug” written on their cups,” the website read. “During this time, new members were made to wear yellow rubber gloves, baby bibs with the phrase “TeaKup” painted on their bodies, and other unusual items.”

According to the decision released by the university, the sorority has had a history of this kind of behavior “going back several years.”

“The information gathered during this conduct case indicates most of these events and behaviors are ingrained into the culture and values of the organization, including some being considered formal traditions of the organization,” the university wrote in its decision. “The presence of high-risk alcohol use, humiliating and degrading treatment of new members, and the disregard for University policies put the physical and emotional well-being of members at risk.”

The sorority will be able to apply for its return for the fall semester of 2023.

The organization will perform several rehabilitative actions in the meantime, including updates to its by-laws and a workshop focused on membership expectations and interactions with new members.

WSMV4 reached out to members of the Intersorority Council for comment but has not yet received a response.