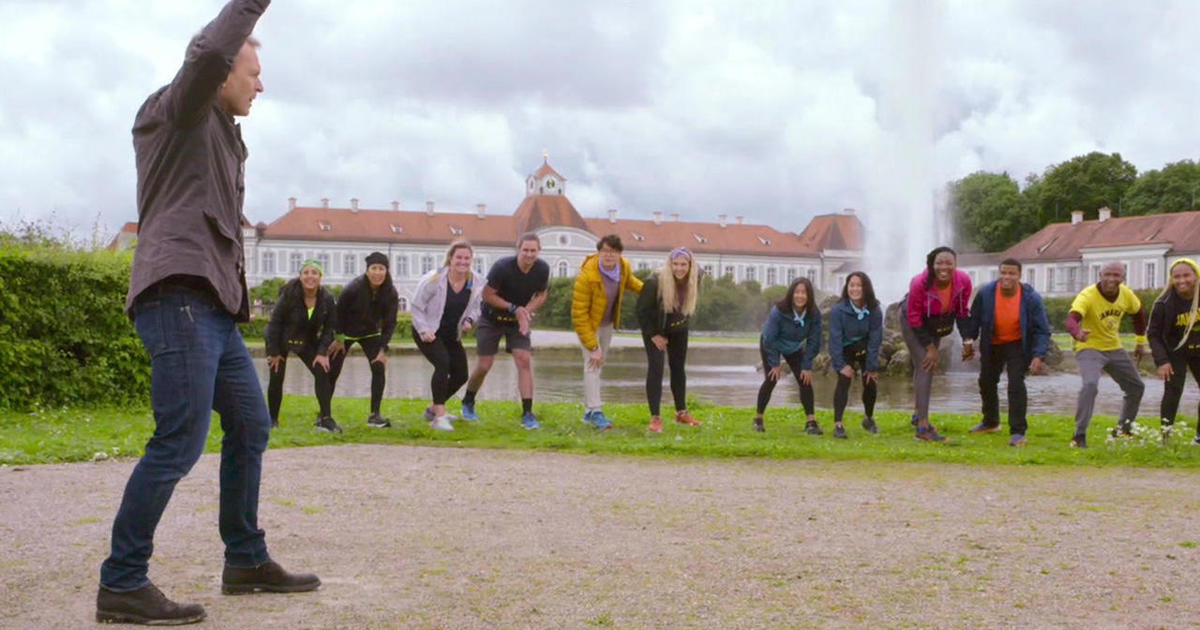 OK, would YOU jump off of a 700-foot dam for a chance at a million dollars? It’s terrifying, but it’s just another day on “The Amazing Race.” Over the past 21 years, the CBS reality show has taken more than 600 intrepid souls on a race around the world, two-by-two – a global odyssey that tests the limits of their endurance, the bounds of their dignity, and the strength of their relationships.

And as with just about any game show, you can’t help but wonder what you’d do if you were in their shoes.

It was in that spirit that “Sunday Morning” correspondent Tracy Smith went along last May for the start of season 34 of “The Amazing Race.”

Before the pandemic, the teams flew commercial airlines. But for safety’s sake they now use a chartered 757. “We’d never done it before; this is a nice change-up,” said Phil Keoghan, who’s been the host for all 34 seasons.  “And maybe after two decades of doing the show, we’ll take it, yeah!”

Smith and Keoghan knew the plane was bound for Munich, Germany. But none of the contestants aboard had a clue. “I just think it’s wild that we’re looking at them; they have no idea!” said Smith.

But they could sense that things were about to get kind of hectic, once they began their amazing race in Germany.

Executive producer Bertram van Munster has directed just about every minute of every leg of every race since it began in 2001. Van Munster is especially close to co-executive producer Elise Doganieri; the two are married and have traveled the world together in the name of great TV.

She was the one who thought this whole thing up, inspired by a backpacking trip that she’d taken with her college roommate. “I thought, ‘If we put people who know each other together, there’s definitely gonna be drama,'” Doganieri told Smith.

And what’s happened since is TV history: “The Amazing Race” has become a perennial favorite on this network’s schedule, and the winner of 10 Emmys for best competition show – more than any other.

In 21 years of production, the race has been to nearly 100 countries, logging well over a million miles, and counting.

Smith asked, “Did you envision this?”

“No,” Doganieri replied. “The first season we filmed the show, I was working in advertising. I took a leave of absence. I said to Bertram, ‘Should I quit my job? We sold the show.’ He said, ‘No, no, no. Don’t quit your job. It’s television. You never know if it’s gonna get renewed or canceled.’ And then the show got picked up. And I said, ‘Bert, what do you think?’ And he goes, ‘You should quit your job.’

But now, 34 seasons in, van Munster says it all still makes him as nervous as ever.

Smith asked, “So, last night, did you sleep?”

“No, no, I slept maybe three hours,” he replied.

“Because you’re thinking what’s coming next?”

“Even after all these years.”

“It’s a lotta details, but I love it,” van Munster said. “As they say, the devil is in the details.”

And there are a lot of details:

For the Munich leg alone, the racers had to complete not one but three tasks, all inspired by Oktoberfest:  First, roll a beer keg through an obstacle course in under one minute; second, saw through a log; and three, smash an enormous block of ice.  Once complete, they’ll have the three parts of the clue they need to finish the leg.

“The Amazing Race” producers typically do a test run the day before, rain or shine, to make sure a task is safe and actually do-able. And for this leg of the race only, they let Smith and her producer (her husband, John D’Amelio) do the honors.

The log sawing went a little better than the beer keg rolling.

And the ice block challenge was something else. The idea was to patiently chip at the ice until you found a tiny gold puzzle piece. But Smith’s producer is not exactly a “patient” man.

After this, the producers took away the big mallet.

Yes, a game show, but some of the locations are truly amazing, and you never know when a priceless moment is going to happen … or a rare moment of calm, amid the cacophony of bells ringing in Munich.

The next morning, it was time to do what they came for. Before the start, the camera crews stretch like distance runners, getting ready for the mad dash to come. And then – finally – Phil Keoghan says the words that every contestant is straining to hear: “The world is waiting for you. Good luck, travel safe … go!“

We can’t tell you which team finished first in episode one (you can find out later this week), but we can tell you that the race started as planned, and that it was as wild as ever.

Smith asked Doganieri, “Thirty-four seasons and the show has not been eliminated. Why do you think the show survived?”

“Our backdrop of the world is forever changing,” she replied. “We’re never going to run out of locations to film in. And it’s super entertaining. It’s humorous. We’re kind of laughing at ourselves, but also traveling the world and getting to see places you may never get to see in your lifetime.”

For the contestants (even the pretend ones), it’s a chance to learn a little bit about the world and themselves in ways they never thought possible.

And for the creators of the show, you get the sense it’s all still pretty amazing for them, too.

“We thought we would be just two seasons, maybe one season,” said Doganieri. “Never in a million years did I think that we’d still be doing this.”

To watch a preview of the 34th season of “The Amazing Race,” click on the video player below:

Reflections on the “Heartbreaking” Decision to Give Up Daughter’s Custody by Hayden Panettiere
In a sneak preview, Hayden said that she has experienced cruel lies being disseminated about her as a mother over the years to hosts Jada Pinkett Smith, Adrienne Banfield Norris, and Kelly Osbourne.
On Sep 28, 2022
View all stories