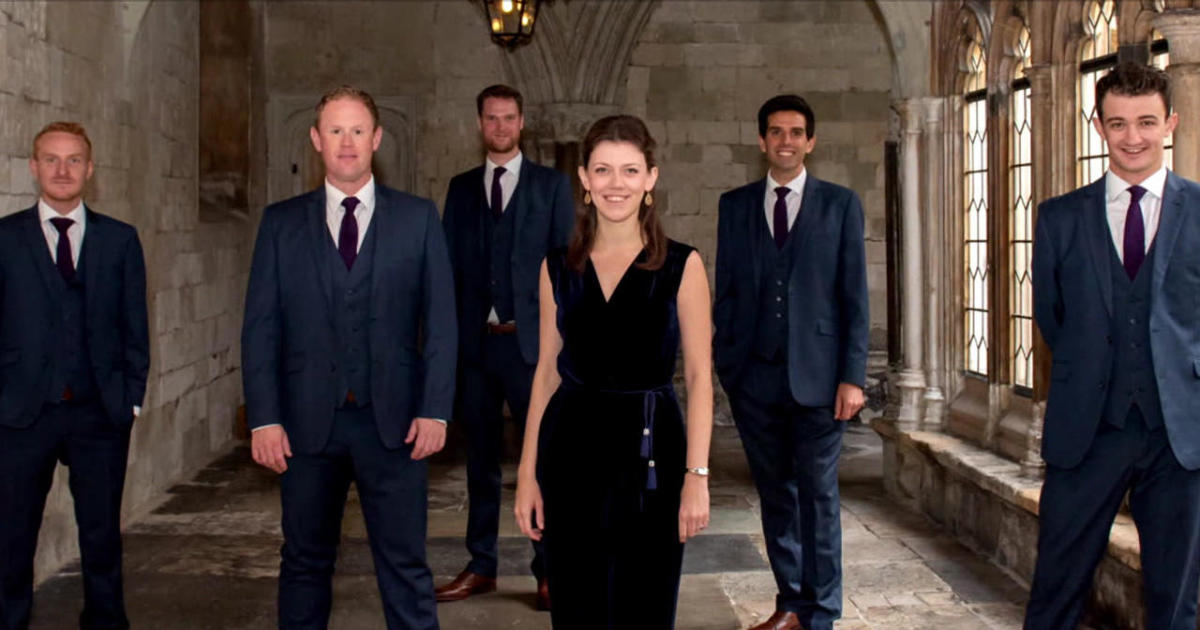 Tomorrow, in St. George’s Chapel at Windsor Castle, Queen Elizabeth will be laid to rest. And the Choir of St. George’s Chapel will fill the room with song, as it has at royal events for nearly 700 years. “The choir was founded in 1352, so it’s quite old,” said tenor Nick Madden.

In 2008, he and bass Simon Whiteley decided to form a sub-group of the choir, to sing music you won’t find in any hymnal. They’re called the Queen’s Six.

The Queen’s Six performs “Stand By Me”:

“So, you’re not going to change your name to the King’s Six?” asked correspondent David Pogue.

“No, absolutely not,” said Whiteley.

He and Madden had noticed that the full chapel choir was often asked to sing something lighter after royal dinners: “The sort of classic Queen’s Six program would start with maybe three or four pieces of early church music, so from 500 years ago. We then might sing a few folk songs. And then, we’ll go into a couple of Broadway and a couple of pop songs.”

As part of their compensation, these singers and their families get apartments right in Windsor Castle. Pogue asked, “So, when I meet you at a party, you say, ‘I live in Windsor Castle,’ is that just the world’s greatest opening line?”

Eight times a week, they rejoin the full St. George’s Choir in the historic chapel to sing for the daily services, which are open to the public. Their “office” is the chapel where the Queen will be buried, alongside centuries of other British kings and queens.

“We have a couple of big hitters, Henry XIII and King Charles I,” said Madden.

“And we’re talking about the actual remains are under this spot?” asked Pogue.

“You never get used to singing and working in a place like this,” said Whiteley.

Over the years, they’ve sung at all kinds of historic royal events, from Prince Harry’s wedding, to the funeral of the Queen’s husband, Prince Philip, who died last year.

For hundreds of years, only men sang in the St. George’s Chapel Choir. But last year it admitted women for the first time, and the Queen’s Six followed suit, by welcoming Lissie Paul. “We knew she was exactly the right fit,” said Whiteley.

“Usually the higher stuff I’ll sing,” Paul said, “and then, yeah, I can do the low stuff, too.”

“That’s the reason she got the job – she can do everything,” Madden said.

Pogue said, “There’s a cultural question, too. I mean, you’re coming into a bro culture of its kind.”

“We’ve never been called a ‘bro culture’ before!” laughed Lilburn.

They have performed for Queen Elizabeth. “And it was an enormous pleasure to do so,” Whiteley said.

“Is there some concern about, ‘You are representatives of the royalty’?” asked Pogue.

“We take it all very seriously,” Madden replied, “and the responsibility we feel for it, as well as having fun with it, because we’ve all got sense of humors.”

“Yeah, some of them better than others,” laughed Lilburn.

In February, the Queen’s Six will release a new pop album, and perform live at New York City’s Town Hall.

Madden said, “It’s a vocation, and it’s a lifestyle, rather than a 9-to-5 job. I mean, we do it because we love it, and we get fulfillment from it, either spiritually or musically, or all the above!”

On the occasion of our visit this summer, the Queen’s Six offered a special treat: the world premiere performance of the “Sunday Morning” theme, “Abblasen,” arranged for voice by David Pogue:

You can stream the Queen’s Six album “From Windsor With Love” by clicking on the embed below (Free Spotify registration required to hear the tracks in full):