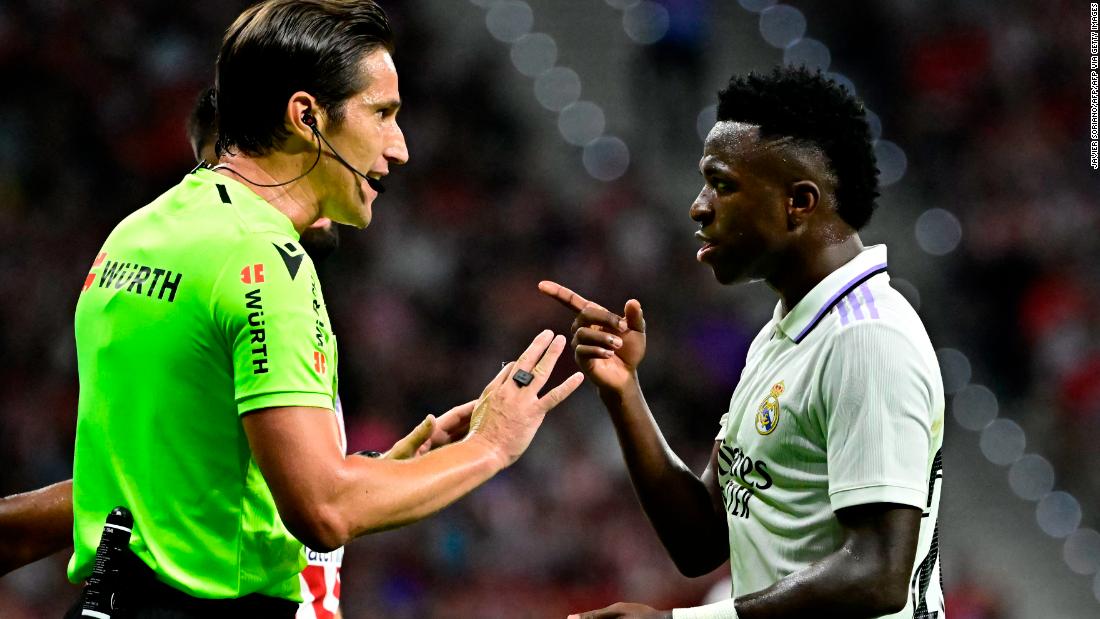 In a video posted to Twitter by Spanish radio station COPE, a substantial group of Atlético supporters outside of Atleti’s Metropolitano Stadium can be heard chanting: “You are a monkey, Vinícius, you are a monkey.”

It came just a day after Vinícius condemned what he described as racist criticism he received for his dancing goal celebrations.

While appearing on Spanish TV on Friday, Pedro Bravo — a leading agent and president of the Association of Spanish Agents — compared the Brazilian’s dancing celebrations after scoring to the behavior of a monkey, arguing the forward was not respecting his opponents and “should stop playing the monkey.”

Bravo was accused of using racist language by many on social media and has since apologized on Twitter.

“I want to clarify that the expression ‘playing the monkey’ which I misused to describe Vinicius’ goal celebration dance was employed metaphorically (‘to play the fool’),” Bravo wrote. “Since my intention was not to offend anyone, I sincerely apologize, I’m sorry.”

READ: Real Madrid’s Vinícius Jr condemns ‘racist’ criticism of dancing goal celebration
Atlético did not immediately respond to CNN’s request for comment about the chanting outside of the stadium, but wrote on Twitter before the game: “Support Atleti with passion and respect to the rival!”

Real opened the scoring with a sensational half-volley from Rodrygo off a superb Aurélien Tchouaméni pass, with Vinícius joining Rodrygo in his dancing celebration after scoring.

In a heated atmosphere, several Atlético supporters could be seen making gestures towards the Brazilian pair during their celebration.

Los Blancos doubled their lead when Vinícius’ attempt on goal ricocheted off the post into the path of Federico Valverde, who finished at a tight angle past a helpless Jan Oblak.

Mario Hermoso pulled a goal back late, but it proved too little, too late as Real closed out the nervy affair to extend its perfect start to the season with six wins from six in the league.

After the match, Vinícius tweeted a photo of Rodrygo and himself dancing with the caption: “Dance where you want.“